We develop and apply materials and methods for the investigation of electron spin coherence in nanoscopic systems and devices. The spin of the electron adds another dimension to electronics that can be useful for applications but also for device analysis. Our research programme consists of three branches:

We have always interesting topics in emerging fields of experimental physics for Bachelor's and Master's theses available. Please do not hesitate to contact Prof. W. Harneit for more information. 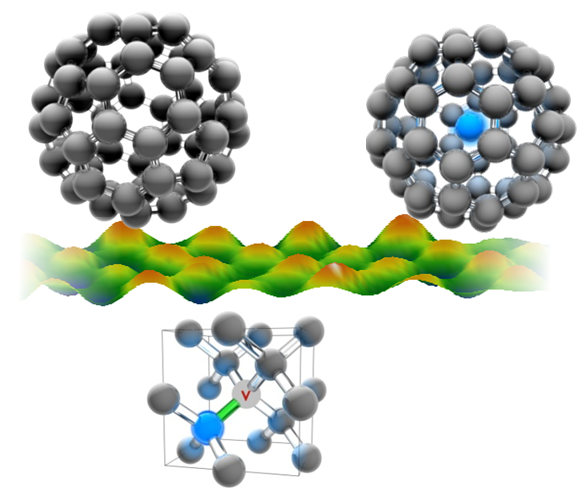 Spins in condensed matter are often paired since unpaired electrons are chemically very reactive. Two classes of spin systems with long coherence times are trapped atoms that retain their open-shell configuration when encapsulated in a molecular cage like the N@C60 endohedral fullerene, and defects in semiconductors like the NV centre in diamond. 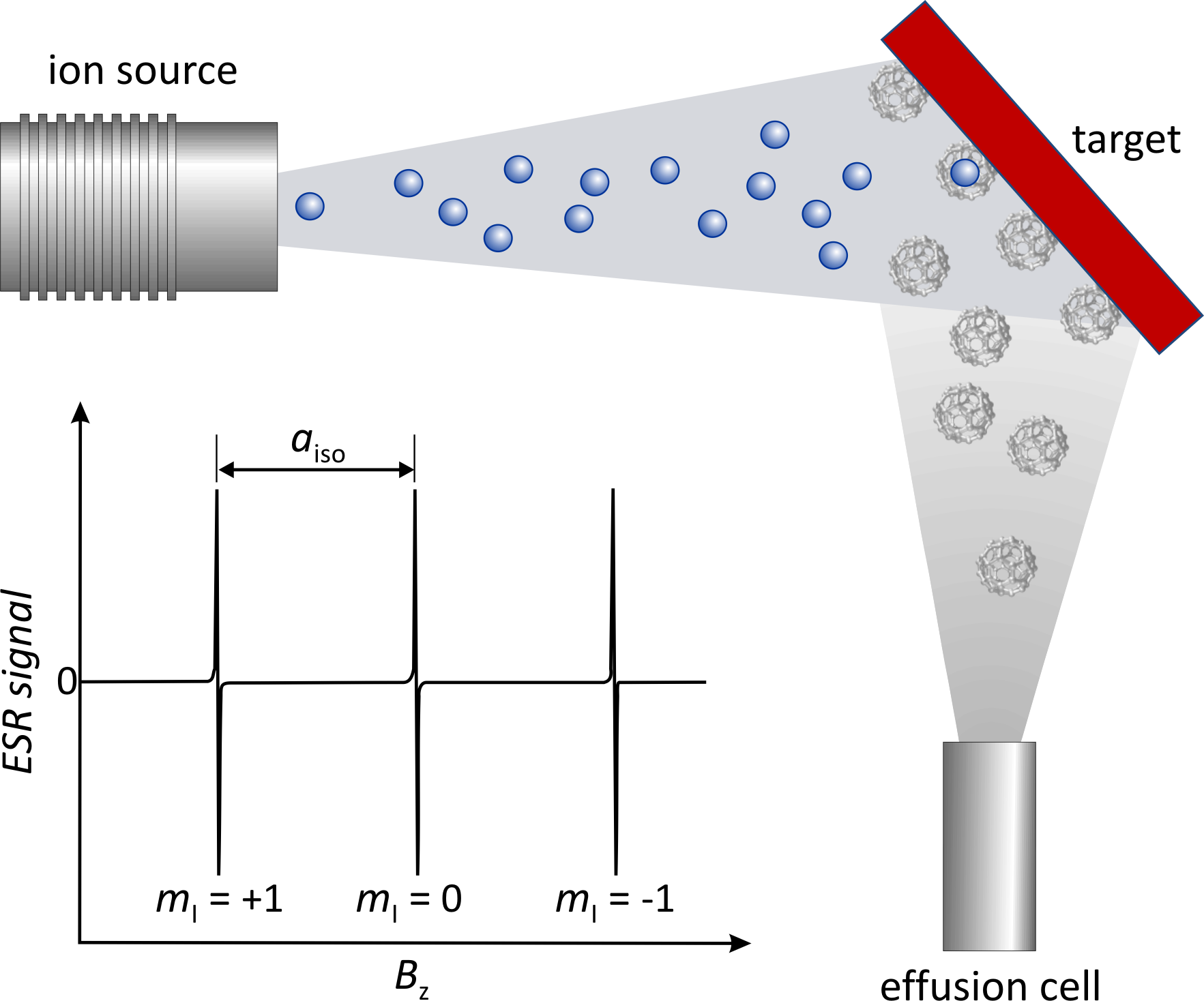 Fullerenes such as the soccer ball-shaped C60 provide an ideal molecular cage for the encapsulation of paramagnetic atoms: the hollow space is just large enough to fit the spin S = 3/2 atoms nitrogen or phosphorus by repulsive van der Waals forces (shown on the right). There are thus no chemical bonds between the encapsulated atom and its molecular cage, and hence no transfer of spin density. This leads to relatively long electron spin coherence at room temperature (T2 = 50 µs), which is essentially limited by vibrations of the molecular cage (i.e. by T1 = 100 µs). At low temperatures (T < 100 K) where these vibrations are not excited, spin coherence can persist up to milliseconds.

In our group, we fabricate mostly N@C60 by N+ ion bombardment of bare C60 molecules in our implantation setup. The filling ratio is initially low and needs to be enhanced by repeated fractionation using high-performance liquid chromatography. This process is controlled by monitoring the electron spin resonance signal unique to N@C60 (see figure right). High-purity (> 99 %) N@C60 material can be obtained using this method, thus providing a true source of ready-made qubits that are stable at room temperature. 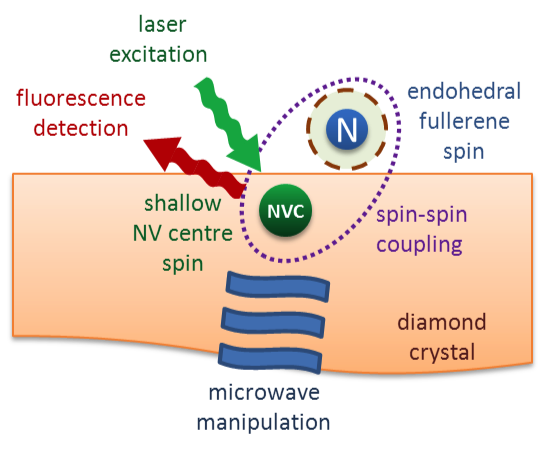 The NV (nitrogen-vacancy) centre is one of the many optically active defects in diamond. Its outstanding properties of high optical stability, relatively high fluorescence yield, combined with its paramagnetic ground state, have turned it into a highly popular qubit candidate. We are interested in very shallow NV centres that are sufficiently close to the surface so that they can couple to external spins. These can be prepared by N+ion bombardment with similar ion energies as those used in the production of endohedral fullerene.

Traditional Electron Spin Resonance (ESR) uses microwave detection, which is inherently limited in sensitivity due to the small energy of microwave photons. It is however often the method of choice for systems with a paramagnetic ground state. Selection rules governing the lifetimes and transport of elementary excitations, on the other hand, can be quite strict even at room temperature, especially in organic materials. The well-known weakness of inter-system crossing is one of these rules, which may lead to spin-dependent fluorescence. A similar process governs charge carrier recombination in semiconductors and leads to spin-dependent currents. Since electrical charges or currents and also luminescence photons can be detected with very high quantum efficiency, electron spin resonance sensitivity can be increased hugely.

When a charge carrier (electron or hole) gets trapped and localized, it may form a pair state with other nearby carriers. If the total spin of such a pair is not zero, carrier recombination is suppressed and the pair can dissociate again and thus contribute to the total current. Using resonant microwaves, we can manipulate the spin pair state and detect the resulting changes in the (photo-) current.

We could detect the motion of only 3·103 spins in a C60 thin-film device at room temperature (W. Harneit et al., Phys. Rev. Lett. 98 (2007) 216601), demonstrating a 106- fold increase in sensitivity over traditional ESR. We obtained even better sensitivity for zinc phthalocyanine (ZnPc) thin films and could show that the interfaces between ZnPc and both, the metal contact and the C60 layer, are of primordial importance for the efficiency and stability in ZnPc-C60 bilayer organic solar cells.

More on this topic can be found in the applications section, see Organic Electronic Devices. 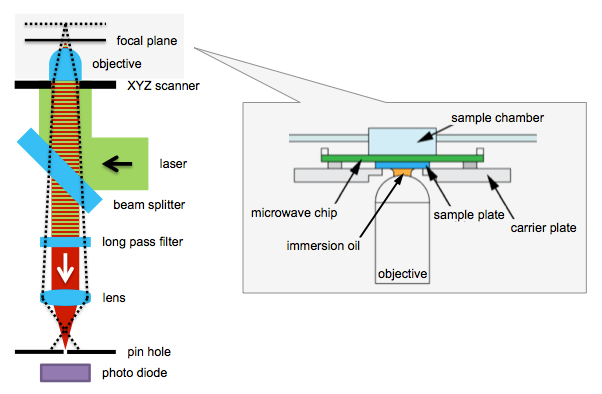 The NV centre in diamond can be detected at the single defect level. This is possible due to the higher quantum efficiency of fluorescence detection (optical photons as opposed to microwave photons), confocal microscopy (spatial resolution of 300x300x600 nm3), and optical polarization of the paramagnetic ground state of the NV centre. We have developed our setup for NV spin detection with the special purpose of coupling experiments in mind. The following picture illustrates this setup.

More on this topic can be found in the applications section, see Scalable Quantum Register.

Our applied research is dedicated to areas where spin coherence is important. We focus mainly on two fields: 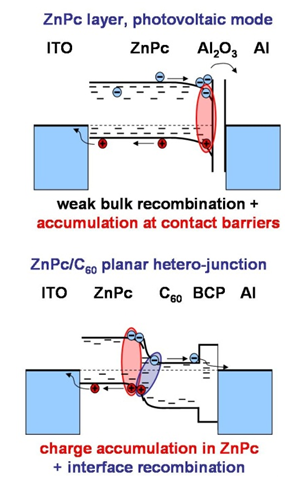 Organic electronic devices are interesting for many applications, but they often suffer from limited efficiency, or limited stability, or both. A big advantage they offer is that molecular materials can be designed with far more versatility than crystalline semiconductors so that, for example, opto-electronic devices can be made much thinner than silicon devices. A well-known mass product is the AMOLED display used in certain smartphones.

The small thickness (typically 2 - 200 nm) of the active layer in an organic device can lead to an analysis problem. Defects in the active layer, or imperfections in its morphology, may occur in very small amounts that escape observation using bulk-sensitive methods. Ultra-sensitive methods like scanning probe or electron microscopy, on the other hand, often require special sample preparation and cannot be performed on complete devices. Trial-and-error is therefore still often used in device development.

We develop the technique of electrically detected electron spin resonance (EDESR) as a new method to characterize complete electronic devices at room temperature.

In organic semiconductors, spin selection rules have a detectable influence on the recombination of photo-generated electrons and holes. This means that we can monitor changes in the photo-current of a solar cell (its most important device characteristic) while manipulating the spin states with microwaves. Only long-lived spin states will be susceptible to this manipulation. But those are the spin states that indicate unwanted processes in the solar cell, i.e., electrons and holes that have become trapped at defects or at interfaces. We are thus very sensitive to such imperfections. Furthermore, the spectroscopic properties of the signal can tell us more about the nature and the location of the imperfection.

In a new project funded by the DFG in the context of the priority programme SPP 1601 “New Frontiers in Sensitivity for EPR Spectroscopy: From Biological Cells to Nano Materials”, we investigate the sensitivity limits of this method by going to true nano-devices like molecular wires.

In a quantum computer, qubits are the basic unit of information. In principle, any two (or few)-level quantum system can be used to encode a logical 0 and 1. In the pure state, which acts very similarly to a classical bit (or state), the quantum system will be measured with 100 % probability as occupying one of these two states. The extra quantum property is to allow arbitrary superposition states ∣Ψ＞ = c0∣0＞ + c1∣1＞ where c0, c1 ∈ ℂ are two complex amplitudes that obey the normalization condition ∣c0∣2 + ∣c1∣2 = 1. Upon measurement, the square of these amplitudes describes the probability of the measurement result.

The power of quantum computing comes about when these amplitudes are deterministically manipulated using external parameters such as optical or microwave fields, or electrical gates. This permits very dense information coding and heavily parallel information processing. However, the superposition states are usually not energy eigenstates and thus not very robust. Any interaction with the environment can lead to changes of the wave function, i.e., to qubit errors. The key figure to consider is therefore the coherence time, which describes the amount of time that the system follows the coherent (and thus deterministic) evolution prescribed by a Schrödinger equation.

In earlier years, we have shown that N@C60 and P@C60 can be used as qubits in this sense and that they have long coherence times even at room temperature.

A quantum register can be considered as the next larger unit of information. The key idea we pursue is to use several of our N@C60 qubits in a device configuration as depicted below.

First, we put them into carbon nanotubes, which nicely align them in a linear chain. This chain is then places near an NV centre in diamond, which acts as a spin-state read-out for several of the N@C60 qubits. Our goals are to demonstrate the read-out mechanism for this configuration and to explore the scalability limits.

We have recently started this project in collaboration with FZJ and generous funding provided by the VolkswagenStiftung. First results are described in these papers.