Current and past research projects focus on the fabrication and manipulation of materials at the single molecular level in insulating environments. Using scanning probe methods, especially high-resolution atomic force microscopy, we study molecular and atomic adsorption on surfaces of insulating materials or on thin insulating films, where the electronic properties of the adsorbates are rather unaffected by the underlying substrate: 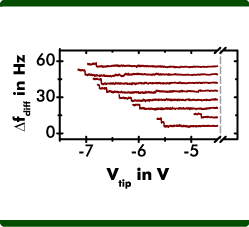 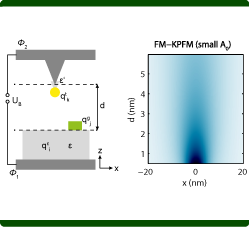 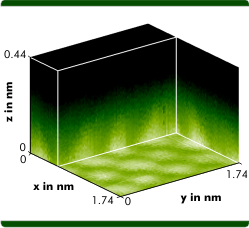 The core capability of frequency-modulated (also known as 'dynamic' or 'non-contact') atomic force microscopy is to quantitatively measure forces with nN down to pN resolution, enabling the exciting possibility to investigate chemical or physical interactions at the atomic scale. Current projects include the application of this technique to a wide variety of systems – especially including surface-supported molecular assemblies – as well as further optimisation of the measurement protocols, the tip preparation, the careful determination of system parameters and the usage of suitable force recovery algorithms. [Kuhn and Rahe, Phys. Rev. B. 89, 235417 (2014); Sweetman et al., Nature Commun. 7, 10621 (2016)] 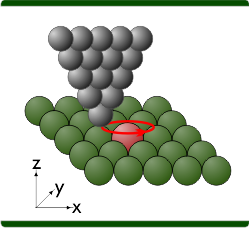 Thermal drift – the result of minute temperature changes within a scanning probe microscope – is a well-known nuisance, and especially hinders a reliable absolute tip positioning. It especially forbids long-term data acquisition in constant-height mode as well as the acquisition of dense force volume data. An elegant solution is to "lock" the scanning probe tip to one surface site and to track the virtual movement, a technique known as atom tracking. We continuously extend and optimise a flexible atom-tracking system to enable new data acquistion strategies. [Rahe et al., Rev. Sci. Instrum. 82, 063704 (2011)] 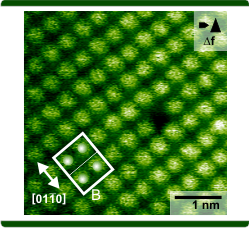 Calcite is the most abundant simple salt in nature, and is best known within the field of biominerals where it combines with an organic phase to materials with outstanding material properties and amazing elegancy. The (1 0 1̅ 4) surface is the most stable natural cleavage plane and proved itself in a number of studies as an extremely promising substrate for insulator-supported molecular self-assembly. With a focus on this application, we studied the complex contrast formation as well as apparent reconstructions of this surface from the atomic-scale force interactions using atomic force microscopy under ultra-high vacuum conditions. [Kuhn et al., Phys. Rev. B. 90, 195405 (2014); Rahe et al., J. Phys. Cond. Matter 24, 084006 (2012)] 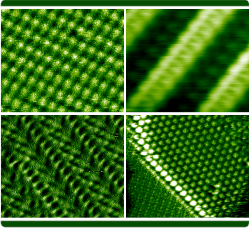